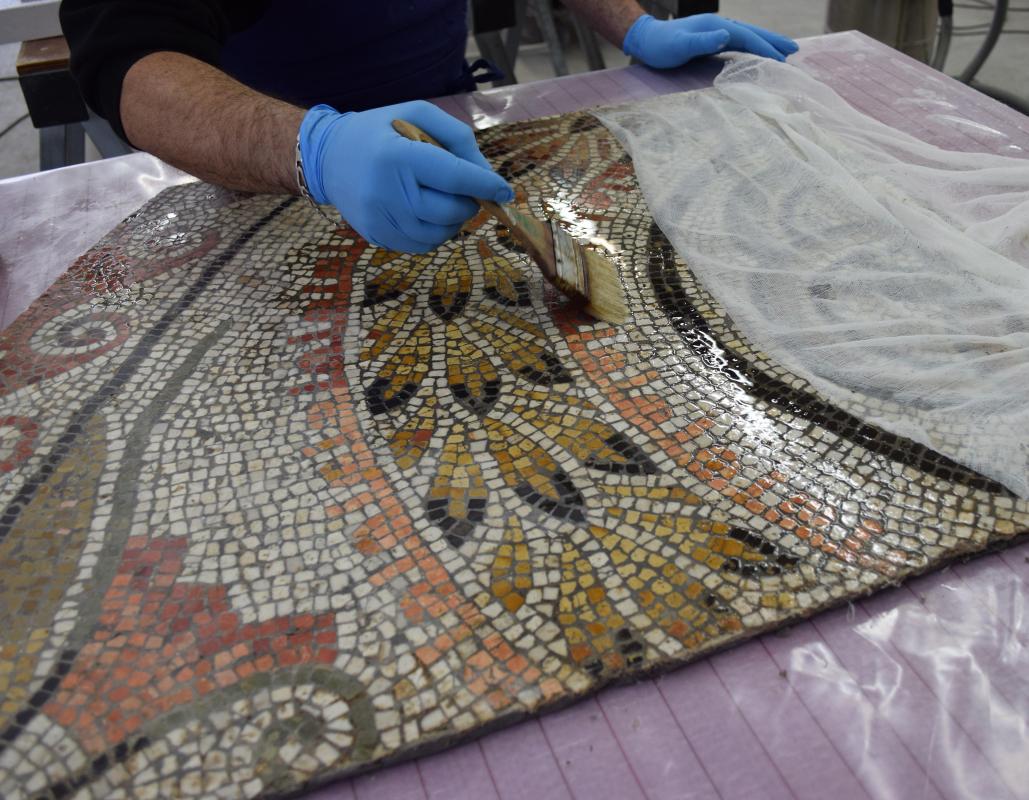 Chapeau
From the excavations to the public... many professions and exciting missions
Corps
Mdaa / L.Roux 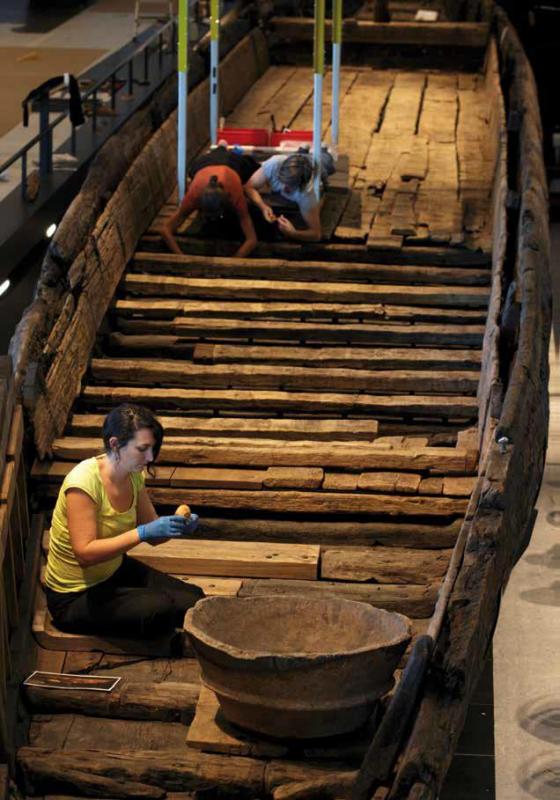 The missions of a museum are based above all on its collections, on the way they are made available to the public via a permanent display or temporary exhibitions and on their safeguarding for future generations. This is the main objective of conservation professionals who, in the 1st place, inventory the collections to ensure that each object has a clear status. Preserving a collection means setting up a climate control system, prepping the works of art to reduce the handling risks as much as possible, regularly monitoring the condition of the works of art and ensuring traceability so that each movement of an object is recorded. Preservation means sometimes resorting to the restoration treatments necessary for the preservation of collections, following strict professional ethics.
Conservation also means knowing and studying. The conservation department therefore ensures the documentation of the collections by gathering as much information as possible on the objects and entrusting their study to researchers. This work allows us to constantly renew and deepen the discourse proposed in the museum and in publications conducted by the department. Preserving a collection is to bring it to life and enrich it. The Musée départemental Arles antique is developing a strong acquisition policy based on the archaeological discoveries made on the territory of Arles and on the purchase or the donation of objects related to the city’s ancient past. It distributes its collections thanks to high quality photographic coverage and 3D digitization of many pieces.
The conservation department also administers the policy of loans granted to partner institutions that promote Arlesian heritage across Europe. In return, it ensures the realisation of international exhibitions. 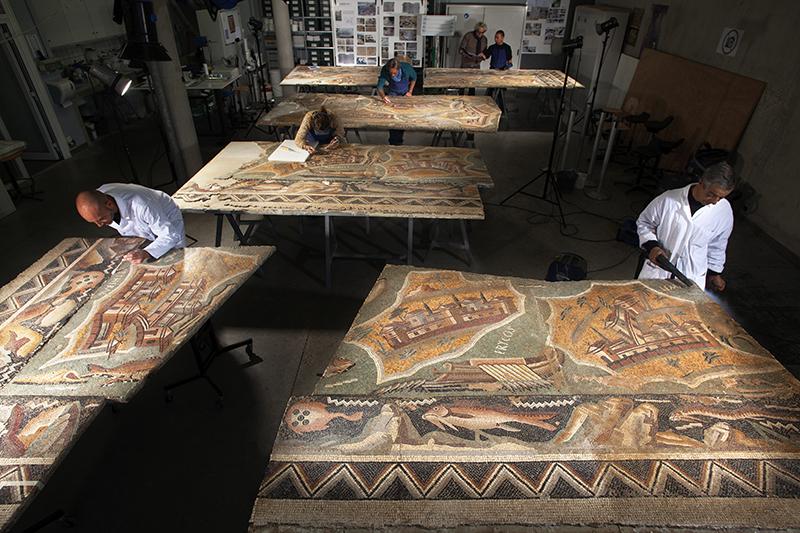 The conservation and restoration workshop

The conservation and restoration workshop was established in 1992. It is specialised in preventive conservation, restoration and presentation of ancient mosaic heritage. Internationally renowned, the workshop is solicited both in France and abroad for the protection and preservation of ancient pavements exhibited in archaeological sites or museums. In addition, the workshop is also involved in the maintenance of the museum’s collections, during temporary exhibitions presented in Arles as well as on excavation sites, for preventive conservation operations of dismantling mosaics and paintings. Its team mediates its scientific activities for
school and adult audiences in the form of visits, conferences, temporary exhibitions, films... The workshop participates as a specialised institution in the development of the research on the conservation and knowledge of ancient mosaics.
It is thus part of the dynamics of training, cultural cooperation and exchanges that are developing
all around the Mediterranean Sea.
The workshop conducts conservation operations in situ or in museums in close collaboration with local teams from countries around the Mediterranean. Thus it has intervened in Albania, Algeria, Egypt, Spain, Greece, Republic of Macedonia, Serbia, Slovenia, Tunisia, Turkey and the Palestinian Autonomous Territories. Within the framework of calls for tender, it also undertakes restoration work for museums and archeological sites in France (musée du Louvre, musées d’Alès, Apt, Fréjus, Orange, musée d’Histoire de Marseille...). The workshop is an important tool of the cultural cooperation between French institutions. 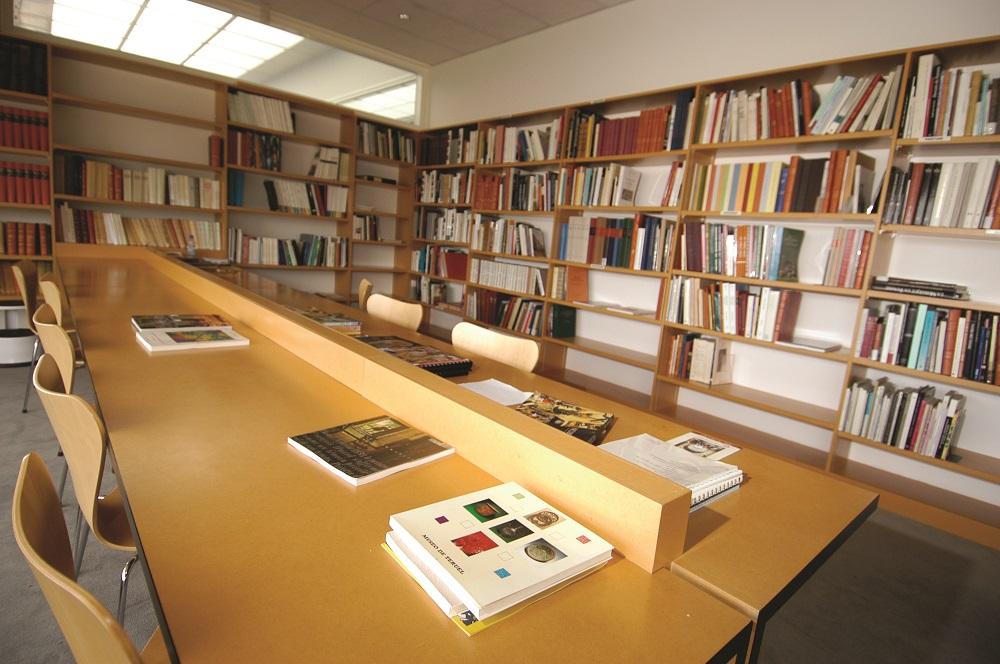 The museum houses a specialized library whose collection includes more than 18,000 books, 8,000 periodicals and approximately 3,000 special editions and unpublished academic works. They deal with history, art and archaeology from Prehistory to the Upper Middle Ages. But other more professional subjects are approached: mediation for cultural affairs, museum law and administration, restoration of works, scientific studies of objects...

The library also contributes to the dissemination of the museum’s publications in France and abroad in organisations with which it has had a trade relationship since its opening in 1995. In addition, it is part of a network of partner heritage institutions named Frantiq, specialized in the Antiquity period, with the mission of lending books or sending scanned articles. Finally, a photo library allows us to respond to the requests for images relating to the museum’s collections. 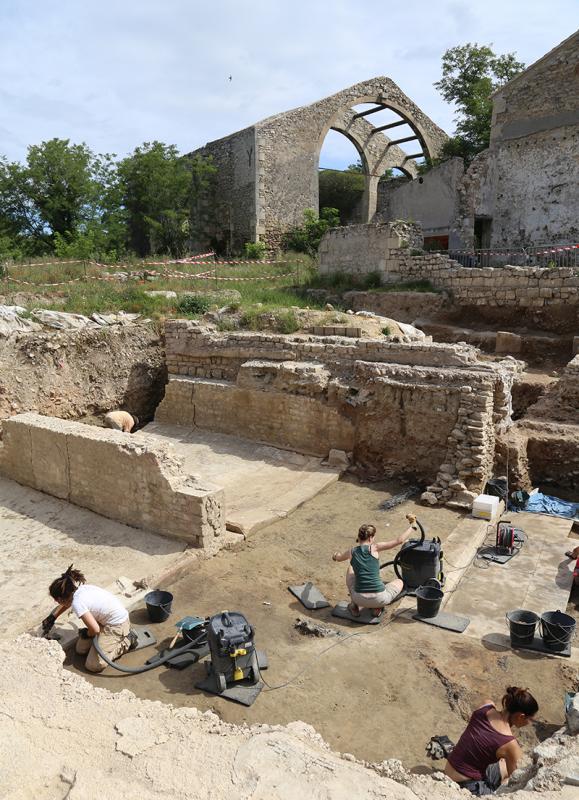 The archaeological department takes part in research programs, directs archaeological operations and contributes to the communication of discoveries to scientists and the general public. In recent years two operations, widely covered by the national and international
media, have monopolized its activity. In the Rhône River, the excavation of the ancient port dump and of the wreck of Arles-Rhone 3
(2008-2011 - bottom photo opposite) led to the refloating of this Gallo-Roman barge for its restoration and presentation to the public.

The museum equipped itself with a new wing, dedicated to the river-sea port of Arles in Roman times, which, together with the barge and some 480 objects, makes it possible to tackle new themes such as navigation, trade or port activities. On land, an excavation carried out on the Verrerie site (2013-2017 - top photo opposite) on the right bank of the Rhône revealed a house dating from the second quarter of the 1st century BC. It is the house known as the Harpist’s house. Its discovery renews the history of this district, which is supposed to have been occupied only from 30 BC, but above all that of the development of pictorial art in Gaul thanks to the discovery of frescoes containing figurative representations (characters) comparable to those of Pompeii or Herculaneum. These worksites follow on from numerous interventions that have taken place since 1975, when the museum’s archaeological department was created with the aim of working in the urban area of Arles. The research carried out as part of the follow-up of works, prospecting in cellars or programmed excavations, has made it possible to approach the topography of the ancient city through the study of public monuments (Roman circus, Trinquetaille portico courtyard, thermal baths...), traffic routes (Calade, Espace Van-Gogh...) and luxurious urban houses (sites of Brossolette, Crédit Agricole, Esplanade, Jardin d’Hiver, Verrerie), an early Christian church (Saint-Césaire) and necropolises (Alyscamps, Circus, Winter Garden, etc.). In addition to their fieldwork, archaeologists participate in symposiums, give university courses in France and abroad, produce scientific reports or publications and receive students and researchers. They also work closely with the public to develop mediation tools (models, educational kits…) and intervene directly with the public with lectures, exchanges with schoolchildren or guided tours on site during archaeological operations. 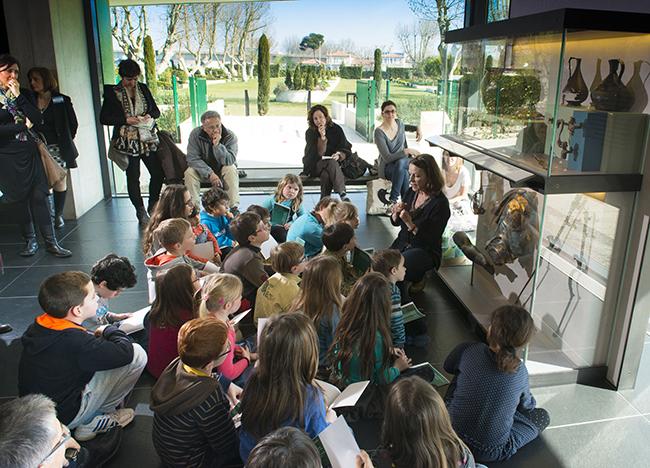 The general public Department fulfils the missions of welcoming visitors, managing the shop and cultural mediation through a rich programme aimed at all audiences (photos p. 18, p. 106 and opposite). Although the museums’ mission of education and diffusion was first recognized
by the 2002 law, the Musée départemental Arles antique has, since its opening (1995), placed the public at the heart of its concerns.
Based on meetings, exchanges and mutual knowledge, the mediation team imagines different activities based on the sensitivities of each person to enable a “tailor-made” discovery of the museum, its backstage and its current events. This role of facilitator between the public and the works of art is based on a lively pedagogy: learning to look at, analyse and question the collections in order to better understand heritage, history and therefore today’s society. It is also a strong commitment to those for whom access to collections, to archaeological discourse and to culture in general, is difficult (people with disabilities, on social support).
The museum thus lives all year round with a very large number of proposals concerning the museum’s collections, temporary exhibitions and the museum’s scientific departments. This work is also imagined in connection with a rich network of institutional and associative partners, with many external contributors from the world of education, research and arts. It is within this framework that the museum is fully in line with the dynamics of its territory and many festivals (music, photography, theatre, dance, historical reconstructions...) find a unique setting and resonance in the museum’s collections.